Spotlight of The Month for May 2021: Gavin Robinson 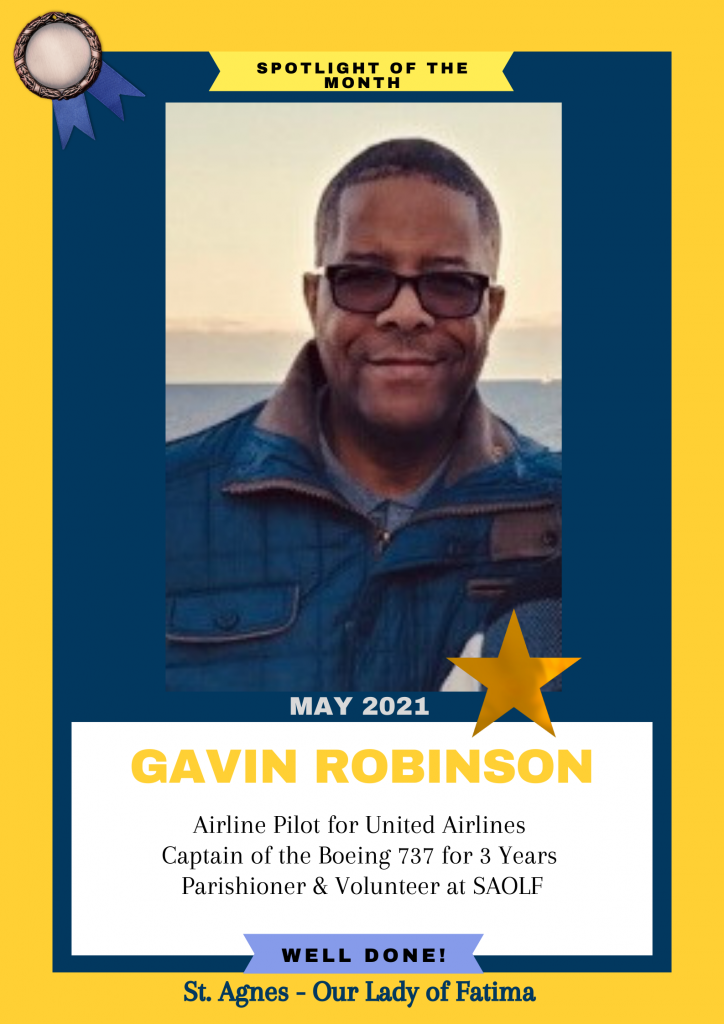 “Dream big. Prepare yourself so that when an opportunity comes your way, you can jump on it.”

Gavin Robinson is our Spotlight of the Month for May 2021. He has been a part of the St. Agnes-Our Lady of Fatima Church for nearly 6 years and credits his good friend, Delores Malby with introducing him to this church. He has worked as an airline pilot for over 20 years starting with Mesa Airlines in 1994 and Continental Airlines which brought him to Cleveland in 1998.

Gavin was born in Guyana and moved with his family to Brooklyn, NY at the age of 13. He developed a passion for flight at a very young age and wanted to be a pilot as far back as he can remember. He has always had a close bond with his sisters who often tell him that being a pilot is all that he ever talked about. But he soon realized that it would be up to him to figure out how to make this dream into a reality. “Being in Brooklyn, I had no idea and didn’t know where to go. No one in high school could tell me where to go except for the Air Force.” Through his own research, he found out about the Embry-Riddle Aeronautical University in Prescott, AZ. He went on to study there before going on to graduate from San Juan College in Farmington, NM in 1994.

Shortly thereafter, his dreams came to fruition as he began his career as an airline pilot for Mesa Airlines, an express carrier for different airlines. In 1998, he joined Continental Airlines (now United) as First Officer and Copilot and then flew as the Captain of the Boeing 737 for three years. When he suddenly fell ill in 2015, his mother sent his sisters to check on him and encouraged him to go to the doctor. It was then that the doctors discovered that he had a brain tumor that required an immediate operation. His mother and sisters stayed with him throughout his surgery and were there to help him through his recovery. Because of this, he says that he owes his life to them.

One day while he was sick, he agreed to attend Mass at Fatima with his good friend, Delores Malby, and he immediately fell in love with the church. “I liked everything about it. I felt like I was at home. Surrounded by people that you know who care about you.” He fondly remembers being called up to the front of the church by Br. Bob who said a prayer for him since this was the day before one of his surgeries. “First time in my life that ever happened.” Gavin has been actively involved in the church from volunteering at the hot meals to participating in different activities, like the Alpha program. After joining the church, he decided to convert to Catholicism, and he credits his faith and the Fatima family with getting him through the difficult times of his illness and recovery.

Gavin is hopeful and optimistic that he will return to work soon and continue flying as an airline pilot. His words of encouragement for anyone with goals of succeeding academically are, “Dream big. Prepare yourself so that when an opportunity comes your way, you can jump on it.” He also urges parents to “Encourage your kid to soar. See yourself as something bigger.”