Spotlight of The Month for March 2021: Michael Bussey aka ‘Busman’ 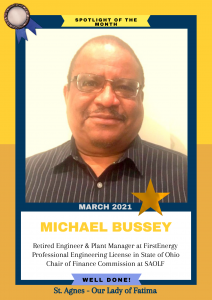 Michael Bussey (also known as Busman) is our Spotlight of the Month for March 2021. Busman has been a part of the St. Agnes-Our Lady of Fatima Church for over 20 years. He and his wife, Debbie were married at Our Lady of Fatima in 1997, and their two godsons, Jerome Harris and Paul Jackson are also parishioners. For the past four years, he has served on the Pastoral Council as the head of the Finance Commission. In this position, he has managed large budgets including those that have led to major renovations to the church as well as the reconstruction of Legacy Hall which will be completed later this year.

The passion that Busman has for mathematics and his attention to detail has helped him to excel in many things, especially in his engineering career. “As a small child, I always had an interest of how things worked and mathematics.” This led him to pursue a Bachelor of Science degree in Mechanical Engineering and a Master of Science degree in Industrial Engineering from Cleveland State University. He also earned his Professional Engineering license, which is the highest standard of competence in the engineering profession. This PE license also enabled him to practice engineering professionally and independently in the State of Ohio. His work in the Utility Industry at FirstEnergy as both an engineer and plant manager spanned three decades. After retirement, he worked as a professor to impart his wisdom and experience to the next generation of engineers at Becker College, a small Liberal Arts college in Massachusetts.

As a devout Catholic, faith has always been a very important part of his life. “My faith helped me know that no matter what happens in my life, good or bad, I have the knowledge deep inside my heart that things will work out for the best.” It has also helped him in difficult times at work and in life. “I always had faith that God would help me find a solution to the problem and God has never let me down.” A quote that he truly believes in and offers us words of encouragement is this: “All of your dreams can come true if you have the courage to pursue your dreams”.