Spotlight of The Month for July 2021: Ariane Kirkpatrick 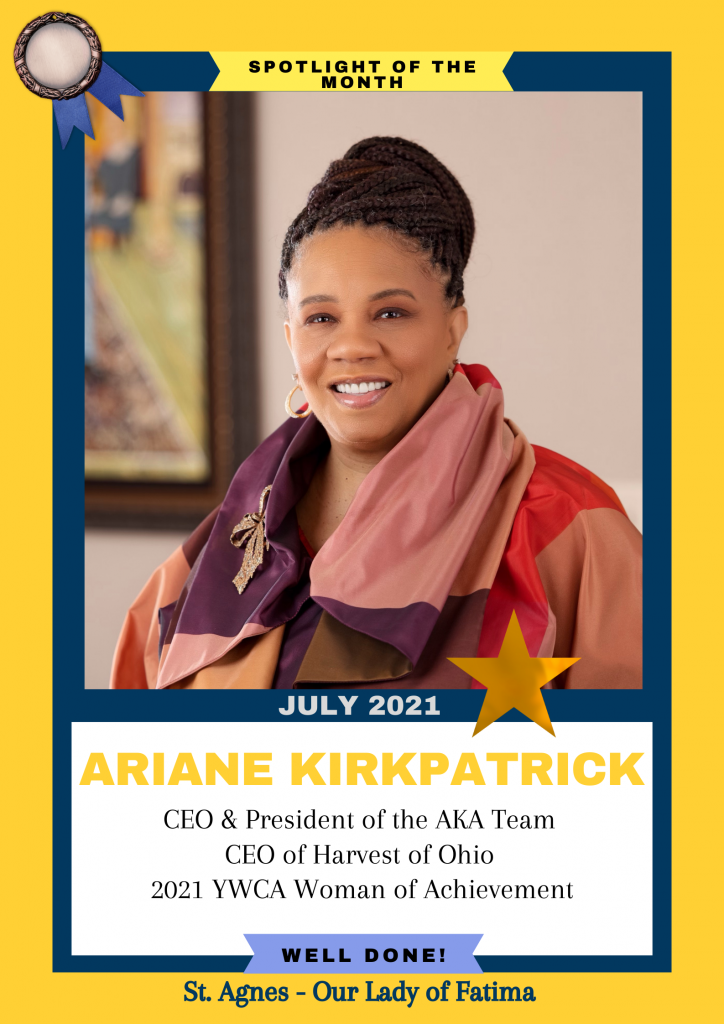 “You have to believe in yourself. It’s okay if your beat is a little off, it’s okay it’s out of tune. ”

Ariane Kirkpatrick is our Spotlight of the Month for July 2021. Ariane is the CEO and President of the AKA Team, a full-service commercial construction, and facilities company in Cleveland, OH. From an early age, she had dreams of being a business owner. “Growing up on 100th & Cedar, there were many black-owned businesses. Entrepreneurship was ingrained in me at an early age. I vividly remember being five years old in 1969 and boycotting the neighborhood McDonald’s with my family because African-Americans were banned from owning franchises.” She has successfully grown her business from a dream to a fully integrated construction management company with multiple divisions including general trades, commercial cleaning, and commercial waterproofing.

After graduating from Warrensville High School in 1983, she attended Cuyahoga Community College where she received her Associate of Arts degree with a concentration in History. Following her passion to be a businesswoman, she then went on to earn her Bachelor of Arts degree in Urban Studies – Nonprofit Administration from Cleveland State University. She is also the CEO of Harvest OH, a vertically integrated medical cannabis companies with licenses in cultivation, dispensary, and processing licenses in Ironton, Athens, Beavercreek, and Columbus, OH. Her plan is to create economic development opportunities that come with both businesses and also the ability to change lives, transform economies, and provide jobs and careers.

Faith has always been a huge part of her life. She joined the St. Agnes-Our Lady of Fatima Church in 2009, which is the same year that she started her construction business. “Fatima was like a spiritual awakening for me. I had recently lost both of my parents and was at a really downtime. St. Adalbert and St. Henry were very integral to my growth and set the foundation for who I am today.” She had considered leaving the Catholic Church at one point before joining Fatima but then decided to visit other denominations before selecting a home church. “I decided to visit Fatima one week after I decided I was joining another church and I never looked back. There is a book that Iyanla Vanzant wrote, One Day My Soul Just Opened Up. That’s how I felt when I walked in the door. It was very moving.”

Recently, Ariane was recognized as a 2021 YWCA Woman of Achievement by the WKYC Channel 3 News for her contributions and achievements in her business. She considers this a very special honor since her passion and purpose align perfectly with their commitment to eliminate racism and empower women.  “My mother at an early age encouraged and taught me to be a community activist. It’s just a natural part of who I am. How blessed to be recognized for my passion and simply doing what I’m supposed to do, being a voice and catalyst to break the barriers, and demolish walls and penetrate ceilings. My ordered steps are to keep my promise of my ancestors to lead, build legacies, empower communities, be a champion of racial equality and women’s rights.” She has also been involved in politics all her life. The first campaign that she was involved in was Carl Stokes’ campaign for the mayor of Cleveland. She also had a small role in the Biden-Harris campaign when Kamala visited Cleveland last year.

Her words of encouragement to people with goals of succeeding academically and professionally are that “You have to believe in yourself. It’s okay if your beat is a little off, it’s okay it’s out of tune. As long as you have that beat that keeps you on the path of success, you will achieve your dreams. There is no deterrent that can stop you but yourself.” Another motivational saying which she keeps on her desk and on her wall to uplift her every day reads, “She believed she could so she did.”