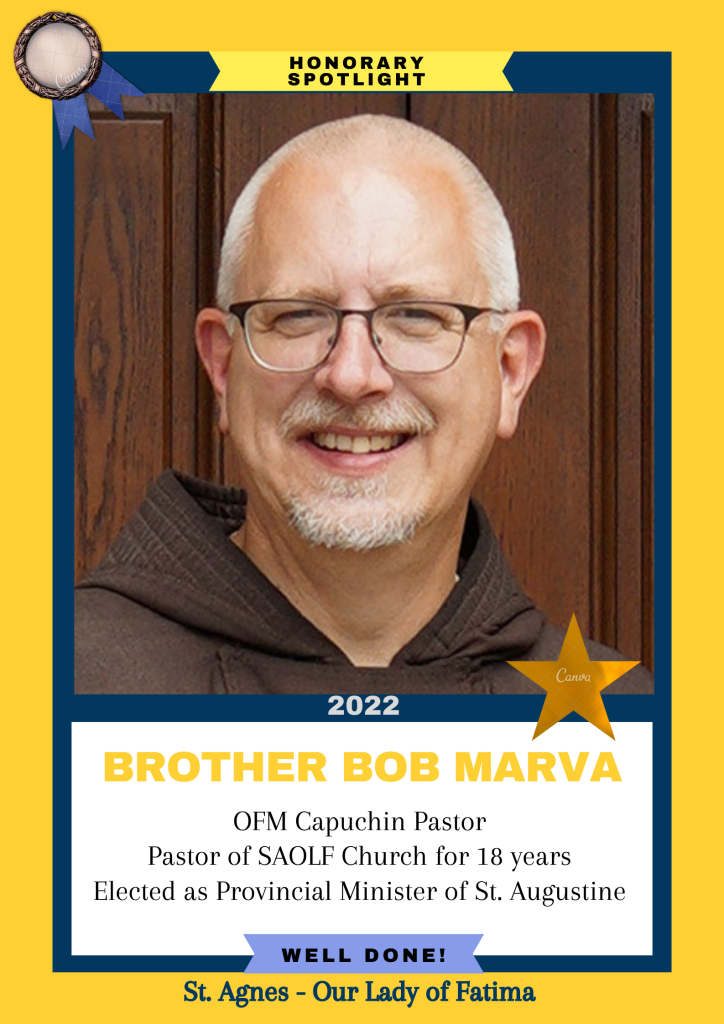 “Keep your eyes on the Lord and keep going forward.”

Today, we are featuring Brother Robert Marva, OFM Cap. (aka Br. Bob) as our very first Honorary Spotlight here at the St. Agnes-Our Lady of Fatima Church. For the past 18 years, we have had the privilege of having Br. Bob as our Pastor. That time will come to an end on July 31st, as his fellow Capuchin Franciscan friars have elected him to serve as the new Provincial Minister for a term of three years in Pittsburgh, PA.

Br. Bob was born in Garfield Heights and moved with his family to Solon, OH when he was 6 years old. Upon relocating to Solon, he and his family became members of St. Rita’s Parish. He took an interest at an early age in religious life and was encouraged by his Pastor to become a priest. So, when he came of age, he made the decision to attend high school at St. Mark’s Seminary in Erie, PA where he graduated in 1984. “When I was in the seminary, I met the Capuchins, and I saw a different way of living and serving people as a friar.” After graduating from Borromeo College Seminary of Ohio in 1988, he answered the call to the Capuchin brotherhood and professed his vows as a Capuchin in 1990.

Br. Bob went on to pursue his Master’s degree in Theology from the Washington Theological Union in DC before working on assignment in Tuscarawas County in Dover for two years. He served as a Deacon for one year in Baltimore, MD, before his ordination into the priesthood in 1997. Shortly thereafter, he began teaching at his alma mater, Borromeo. Three years later, he joined the Holy Trinity-St. Edward’s & St. Paul’s in Cleveland, OH. In 2004, he became pastor here at SAOLF, and the rest is history!

Becoming a friar created an avenue for Br. Bob to do many things and go places that he never thought he would. It allowed him to more work within the city, to teach college students, and even become a part of the SAOLF church. Br. Bob also says that religious life, as a whole has “opened me up to different things that God has asked me to do that I thought I would never be able to do, and I met some really great people.” As Provincial Minister, he will also get the chance to support his fellow Capuchin brothers who are doing missionary work in places like Papau, New Guinea and Puerto Rico.

In his time at SAOLF, Br. Bob has graced us with so many words of wisdom through his homilies and sermons. As he goes on to serve in his new role, he urges us to “continue to be open to God’s working in the community”, and “be kind to each other and be open to what the holy spirit may be asking.” And in times of adversity, “Keep your eyes on the Lord and keep going forward.”